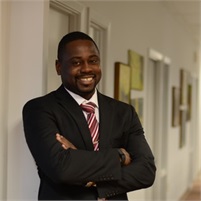 Trocon has demonstrated a wide range of competencies and is a key member of the firm. He works closely with the Principals in developing and implementing financial and investment planning strategies. Being a CFP® registrant shows the wide range of his skill set. He has been very instrumental in work on asset allocation, rebalancing strategies, and tactical investing.

When “Tro” is not at work you will find him and his wife, Katherine, enjoying their home in Cypress. Tro comes from an athletic background and attended Duquesne University on a Soccer scholarship. In 2001 his US Soccer club team from Houston won the US National Championship in the under-19 category. In addition to soccer and other sports he is an avid chess player. Tro’s family is very involved with a private school in Sierra Leone, (West Africa) called the J.T. Reffell Memorial French Friendship School (K-12). Tro’s father and aunts manage the operations of the school.