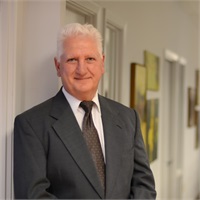 Texas Tech University, Lubbock, Texas, B.A., 1978; American Graduate School of International Management, Phoenix, Arizona, M.B.A., 1979; University of Houston, Houston, Texas, P.L.M., 1983.
Mr. Fowlkes is a founding Principal of Branson, Fowlkes & Company, Inc., in 1987, and Branson, Fowlkes/ Russell, Inc. in 1991. Prior to that He was a Financial Planner at Cigna Independent Financial Services Company (currently Lincoln Financial) from 1986 – 1987. Prior to that he was with; Landata, Inc, as a Consultant 1984-1986, and Mesa Petroleum, Financial Analyst from 1980-1984.
Maco is a Certified Financial Planner, Chartered Financial Consultant, Chartered Life Underwriter and Chartered Advisor in Philanthropy. He is also a Registered Securities Principal through the Financial Industry Regulatory Authority (FINRA) and completed the College for Financial Planning Advanced Studies in Investment Strategies and Portfolio Management.
After receiving the CFP® designation in 1987, in collaboration with Mr. Branson they decided to form an independent firm. This decision was driven by the knowledge that the clients we were serving were relationships we were going to maintain for a lifetime and our loyalty should be to them and not a financial services product sponsor. That philosophy still holds true today. We take a “best of breed” approach to the financial products we use, and many of our clients have been with us since the beginning. We are committed to staying well informed on what strategies are available, and in communication with our clients enough to know what their needs are.
Maco visits his brother and family in Marfa frequently and takes groups out for quail hunts on the family ranch land. Maco was involved with Houston Rugby Club for many years, both playing, and everything else that goes with Rugby. He loves sports of all kinds including tennis and on Saturdays you will find him watching his beloved Texas Tech Red Raiders play football.
Maco has raised his son, Gage, to be an outdoorsman, athlete, and a scholar. Gage is a senior at Lamar High School and plays on the Varsity Tennis team. He is also a member of the Katy Dusters Sporting Clays team. He competed in both the State Tournament in San Antonio and the National Sporting Clays Tournament in Ohio in 2020. Gage is an avid fisherman, when he is not in school, you will find him at the bay house in Dickenson or in the surf at Galveston.
Maco’s family has very deep roots in Texas. His grandfather on his father’s side, Judge Edwin H. Fowlkes, donated the land to McDonald Observatory where the Hobby-Eberly Telescope was built. It is one of the world’s largest optical telescopes, and rests atop Mount Fowlkes. Maco’s grandfather on his mother’s side, Maco Stewart, a young Galveston lawyer, formed Stewart Title company in 1893. Stewart Title is now one of the largest title companies, with more than 6000 employees. Maco’s dad, Manny Fowlkes, and his uncle, Edwin Fowlkes were well known for building a 300,000-acre ranch, which was among the ten largest working ranches in Texas. In 1988 the ranch was purchased by TPWD and became Big Bend Ranch State Park, the largest park in the State Park System.